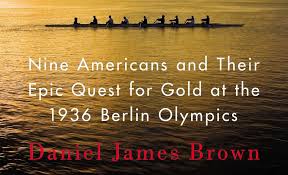 When I first rowed in college (1978), people said our boat had been in the 1936 Olympics. At the time I thought it was a joke, but now I’m not so sure. We were a ragtag startup team at WVU. We kept our shells in an old tractor-trailer truck behind the lumberyard on the Monongahela River. That thing was so heavy that our old coach made the men carry it for us! Of course, that could have just been because he was 70 years old and didn’t have a clue how to coach women – it had never been done before!

I’m excited that The Boys in the Boat is coming to PBS on August 2nd, just in time for another Olympics. I read The Boys in the Boat by Daniel James Brown when it first came out in hard back. The oddly-stylized first 50 pages really annoyed and distracted me – as if Brown were writing a 1930’s news article instead of a book for a modern audience. It was also clear to me that he wasn’t a rower. But the story is so compelling and well told that I slogged through – and was immensely rewarded. Back then rowing was still the sport of gentlemen, and the strapping young loggers and woodsmen of the Northwest had a distinct advantage over their elite East Coast rivals. After all, it was only 16 years earlier that Jack Kelly, the father of famous actress Grace Kelly, was excluded from the Royal Henley Regatta in England because he was a bricklayer. It didn’t matter that he had won dozens of U.S. Championships; the fact that he was a manual laborer was enough to ban him from the regatta.

When I first started rowing it was still very much a sport for men, but things were changing rapidly. I moved to Washington DC in 1979 and joined Potomac Boat Club on the Georgetown waterfront. We had a small bathroom, but no showers or lockers for women were available, not yet. There was one group of women already rowing there; they had all graduated from Ivy League schools, where Title IX had guaranteed some access to the sport for women. They were much better than my motley crew of WVU graduates and friends of friends. I used to telephone about 20 people every night just to get enough young women to put together an Eight for the next morning. The women already rowing at Potomac Boat Club didn’t talk to us for two years – not until we announced that we were planning to race at the Head of the Charles in 1981. We hired a coach, added to our practice schedule and improved so much that we combined forces with the MIT-Georgetown-Wellesley alumnae for my first races after college. To prepare for Masters Nationals, we often practiced twice a day. I didn’t own a car, so I biked down to the boat club at 5:00 am, worked eight hours, biked back down to row in the evenings, then biked home through Rock Creek Park, straight uphill to my house on Military Road. I was in really good shape. Rowing was my life for an intense two years. Then in 1982 I joined the Peace Corps, moved to West Africa and didn’t row for another 18 years. Rowing has shaped my life.